Once your pupils can identify a number of languages, they can then start to explore the similarities and differences between the different languages. This is where their investigative skills really come into play.

Why not put the days up in the classroom in a different language each week.

Which languages have months which have similarities with English?

You can investigate colours using Word Grid, Pairs and Spinner. These programs can also be used to supplement the day, colours and months outlined above.

The sequencing tool enables the pupils to see how clues from one language enable you to put a sequence of words in the right order in another language. This is done with numbers, days and months and the language pairs are French and Spanish, Portuguese and Italian, and Dutch and German.

The Borrowed words activity supplements the above

Our Body enables us to compare and contrast body parts

This is an opportunity to look at word order in different languages. Use the link to the online phrasebook to collect some samples 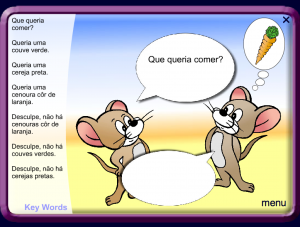 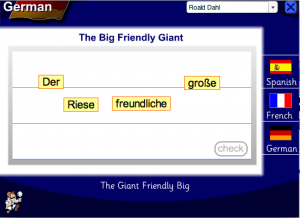 Parallel text work enables pupils to investigate a text in the foreign language using English as a support. In this way pupils can discover some of the key features of a language and compare them to English and other languages.

Here is a description of a lesson delivered by Maggie Croft at All Saints Church of England School, Coventry from the Ofsted report on the pathfinders:

The teacher asks the pupils to deduce the language of Harry Potter texts in French, German and Spanish without the help of the English version. Pupils are very attentive and work very hard to identify the right languages. The teacher questions them very effectively to explore the reasons why they selected particular languages. Pupils deduce which book the text is from, using cognates, and say how they have done it. The notion of ‘clues’ as a language-learning strategy is rehearsed and reinforced so that pupils can use it routinely.

Pupils then listen to extracts of Harry Potter in the three languages on a tape and have to match the sounds they hear to text and deduce the language. They listen very hard and a forest of hands shoots up. The activity captures pupils’ interest very well, harnessing their own knowledge about Harry Potter in English as a reference point. Pupils are fascinated with the sounds of the different languages.

The teacher shows pupils three different language versions of the hardback book, Harry Potter and the Philosopher’s Stone. They are in awe at the notion that the books are translated into over 50 languages across the world. The next task is to look at the book covers and deduce the language and the title in English. Pupils try very hard and are successful. They pass the books around, handling them with respect; the teacher conducts spot checks, ‘Who has the Spanish version? – very good strategies for harnessing and retaining pupils’ interest.

She asks pupils to help her put the words of each language title under the language heading. Their task is, in pairs at their tables, to get similar words into the right language and order, based how they put the English title together. They are consistently on task, working at their own pace with the materials and extension tasks. An appropriately challenging deadline is given. The teacher takes the words, all mixed up as in a pack of cards, and one by one says the word in the target language and the pupils help her to put it under the correct language heading and in the correct order so that they can check their own attempts. Pupils enjoy getting their tongues around some of the words.

Here are some stories is a range of languages:

The Three Goats and the Gingerbread Man enable pupils to interact with common stories across a range of languages and to pick out key words and phrases from within the text.